A fascinating history of The Wash Ports and Hanseatic League

Lynn’s prominence in the Middle Ages depended on its extensive hinterland embraced by the River Great Ouse and its tributaries,  including several counties at the heart of the nation (the great river had been diverted from Wisbech to Lynn about 1265). This privileged geographical position was reinforced by its location on England’s east coast facing Europe across the North Sea, with London and Scotland within easy reach by ship too. It is therefore no surprise that German merchants from the East were visiting Lynn through the course of the 13th century.

In 1271 Lübeck men were already acting in Lynn as a group or ‘hanse’ and some were enrolled as members of the Trinity Guild, its hall the commercial and civic hub of the town’s merchant rulers, rebuilt in 1422 and still standing on the Saturday Market Place. German merchants from Hamburg and the Baltic secured trading privileges at Lynn and these were confirmed, after some local disputes, in 1310. The right to maintain their own houses was a critical concession as other alien merchants had to lodge with native burgesses. 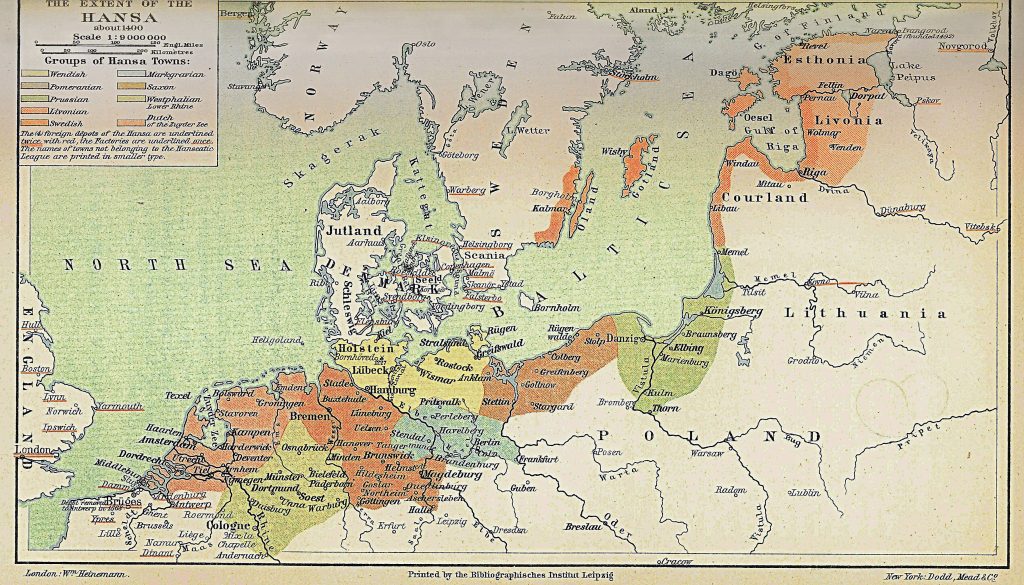 The extent of the Hanseatic League around 1400. Image courtesy of True’s Yard Museum, King’s Lynn.

Herring, furs, timber, wax, iron and pitch were imported into England via Lynn in Hanseatic ships which carried wool and sometime grain from The Wash to Flanders, Belgium. Wool, skins, cloth and lead were commodities taken back to Danzig and other German harbours. Lynn merchants sent cargoes to Prussia in Danzig ships and to Bergen in Lübeck vessels, but none appear to have been resident in Norway or Hanseatic cities until the 1380s. Lynn was soon more heavily dependent on the Prussia trade through Danzig than any other English port.

A number of Lynn merchants and their associates seem settled in several Baltic seaports by the early 15th century, particularly in Stralsund and Danzig. That the Wash port treated independently with the Hanseatic cities in the resolution of disputes testifies to a not inconsiderable presence. Details of this commercial and diplomatic interaction can be found in the memorandum book belonging to William Asshebourne, Lynn’s town clerk. In 1408 he received a letter from Lynn men in Danzig setting out their ordinances recently drawn up for “their company” there. There appears also to have been an exchange or transfer of sailors and artisans between Wash and Baltic seaports. A sizeable group of German shoemakers were living in Lynn by the 1420s for example.

The Hanseatic towns united against England after a major international incident off Denmark in 1468 in which seven English ships were arrested and Lynn men were accused by the Danish King of heinous crimes in Iceland. An Anglo-Hanseatic Sea War in the southern North Sea involving armed merchant ships followed. Peace was negotiated at Utrecht in 1473/4 and the German delegation achieved most of its aims. It insisted on a free gift of their former trading posts at London and Boston and of a new one at Lynn.

The Lincolnshire town was the home of a major international fair in the 13th century and still among the top ten most populous English towns in the late 14th century Wool, salt, fish, wax, cloth, furs, spices and wine were the chief commodities imported and exported through The Wash port. Boston exported more wool than any other English port before 1400, though this flow had dwindled by the 15th century, cloth having largely replaced wool in England’s foreign trade. However, its significance in the later Middle Ages should not be underestimated. No less than 22 local men joined a consortium to export 5781 sacks of wool from Boston in 1377-8.

Boston’s special connection with the Hanseatic League was through the Bergenfahrer from Lübeck and other West Baltic towns. These German merchants controlled the huge fish trade at Bergen where a Kontor had been established in the 1360s after trade agreements with Norwegian Kings. These Bergenfahrer turned Boston into their English distribution centre for fish. Other commodities imported into the Lincolnshire harbour were timber, iron, grains, and pitch from the Baltic, largely by Danzig men in the late 14th century. Cloth and salt were exported from Boston by the Bergenfahrer to Norway and the Low Counties at first, then by the Danzigers to the Baltic.

Around 1400 Hanseatic imports from Bergen still accounted for at least 70% of all alien imports into Boston. The Germans were likewise dominant in the export trade of The Wash port. The Bergenfahrer, and Lübeckers in particular, became much less involved in Boston as a result of the economic disruption caused by Anglo-Hanseatic conflict in the 15th century.

What of the Hanseatic trading post at Boston? When Leland wrote about 1530 the Kontor “remained” but was unoccupied. The gradual withdrawal of the Lübeckers from Boston was a key factor in its decline as a Hanseatic destination. At the same time the Germans insisted on the return of their Boston Kontor in the Treaty of Utrecht (1474) which concluded the Sea War between England and the Hanseatic League. The Kontor was an old house or complex with 10 rooms and seven chimneys with an associated rear building in which there were eleven booths. It was abandoned around 1500. This trading post was located just to the south of the town centre on a bend of the river Witham.

The Wash ports were more important than London for the North Germans in the thirteenth and into the fourteenth centuries because of their geographical advantages and urban status. It is only in the course of the 15th century that the capital city captured the lion’s share of England’s overseas trade. Then Hanseatic activity in Lynn, Hull, Boston and Ipswich fell away.

The New Hanseatic League (NHL) of 190 towns across 16 North European countries was founded in Zwolle (Netherlands) in 1980. It is not a direct descendent of the German Hanse (1250-1550) but the internationality and commercial success of the latter have been an inspiration. The fall of the Iron Curtain around 1990 widened access to membership of Today’s Hanse. 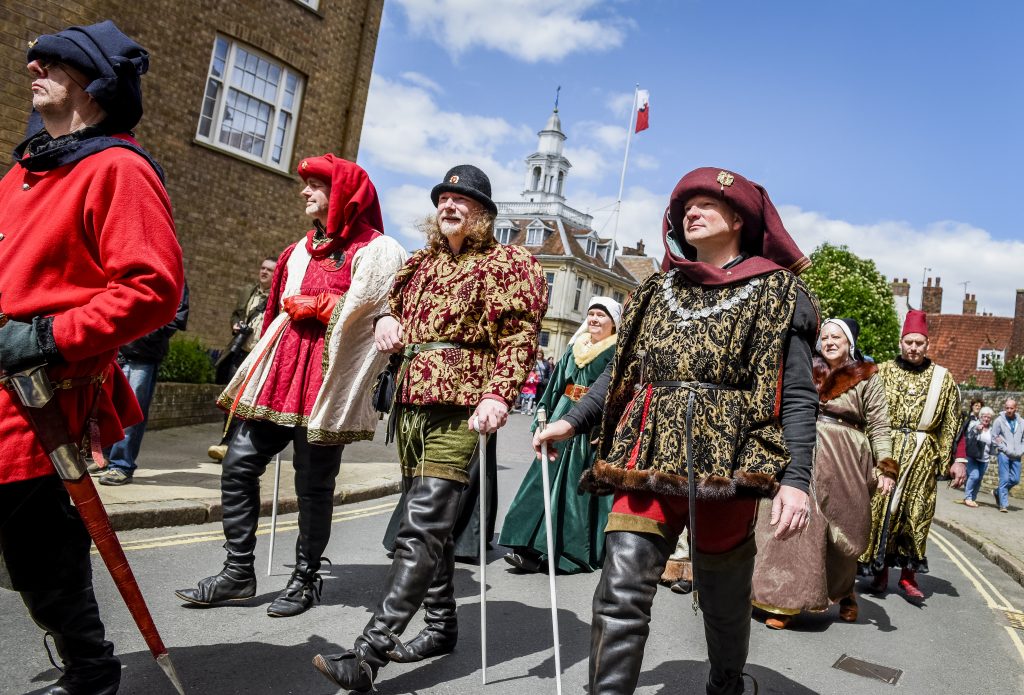 Today Lynn (2005), Hull (2012), Boston (2015) and Ipswich (2017) are NHL members and will increasingly benefit from engagement with their European counterparts. These English towns were not members of the medieval German Hanse but amongst its most important trading partners, fully integrated into its urban network.